Our hero, now named Sampson (previously unknown identity) arrived at Manningham Veterinary Clinic in a sorry state having been just hit by a car. He had been rushed to the clinic by a group of compassionate tradesmen working in the local area, who had witnessed the hit and run that had caused his injuries.

Sampson sustained significant damage to his front and back legs so that he could not support his body weight. He was in shock and having difficulty in breathing.

Emergency veterinary treatment was instituted to stabilise his condition and he was hospitalized whilst we set about trying to find his owner. As he was not desexed nor microchipped and had no collar or identification tags, we held out little hope of someone coming forward. 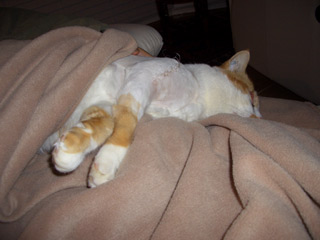 After several days of detective work and no result, Sampson was named and desexed and became one of the extended Manningham Veterinary Clinic family. Whilst under anaesthesia, x-rays taken showed a nasty break in his right front leg as well as a fractured right hip. Orthopedic surgery was undertaken a few days later to repair these injuries, involving the use of a bone pin as well as extra stabilisation with a cast.

Samson proved to be such a brave and appreciative patient that he won us all over, especially Dr Phillippa.

Sampson is now residing at Dr Philippa's house with Benjamin (Dr Philippa's other best friend) and is recovering very well. Life has definitely taken a turn for the better!